365 days a year tied to a meter chain without being able to move, sleeping in concrete, without receiving the necessary love and attention. Only released for hunting. They feel fear and sadness, their life becomes a real hell.

It's the life of suffering of podencos and other dog hunting from rehalas.

The Monteria and the Rehala was declared Good of Cultural Interest of Andalusia, and soon it will be in Extremadura.

HELP US TO SPREAD THE WORD!

Beryl Brennan on 07 November 2021 in Campaign, In the media, Regional news | Permalink | Comments (0) 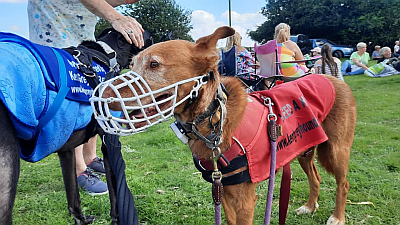 I have been involved with podenco and galgo rescue for 14 years. I've travelled regularly into Spain with a French rescue association to bring Spanish rescued galgos and podencos back to France for foster and adoption. I have NEVER met a podenco which needed to wear a muzzle!

I was horrified to see this photo, especially on a senior dog. Yet it should not be a surprise since the podenco seems to be with a greyhound from a UK retired racing greyhound rescue, some of whom believe every greyhound/galgo should be muzzled.

Since moving back to the UK in January 2021 I have met many greyhounds who are companion dogs and not one of them wore a muzzle. Naturally all were on leads when walked in public but their adopters had never felt the need to use a muzzle. To me, it creates the image that the dog is dangerous!

Have any of my readers felt the need to muzzle their adopted Spanish dog?

I've had an email from a reader to say dogs have to be muzzled on ferries. However, when we have travelled our dogs on ferries they are not muzzled as they travel in cages, as do the dogs on official pet transport. If the dog is loose in the vehicle, then they could be muzzled, perhaps? 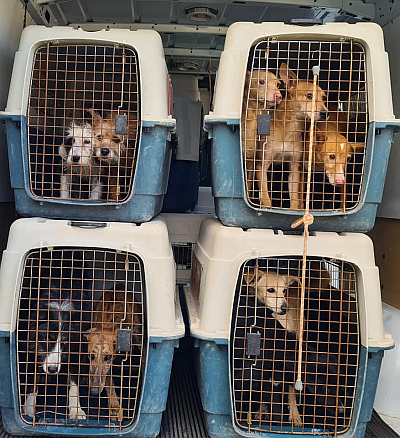 From Ciudad Animal, south of Madrid.

Hunting season just started 2 weeks ago and the kennels are already full of pods, galgos, brotons. Those dogs who care for hunters so much I wish that story was true.

With the galgos it seems that we are more conscious, we know how they are mistreated and used, but the podenco is the big forgotten. You don't know the big problem there is. You don't need to go to the Canary Islands to find dirty, without windows full of scared and hungry pods. In every manchego town there are workshops with so many podencos that are missing fingers to count them. We've been in this for many years and unfortunately little has changed.

A few days ago we were called from the kennel looking for help for several dogs and here we are again, with the kennel van full. Let's try to find a new future for these 20 poor animals. 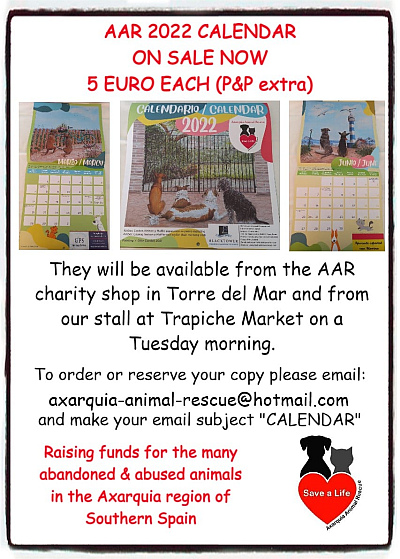 Paypal 8 euros/£10 to include postage to the address on the picture. Read all about this stunning Podenco Canario on this weblink and Contact Sandy direct if you can offer him a forever home.

And Podenco Pepa on this weblink. 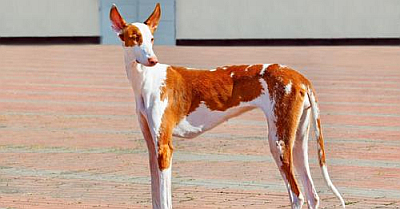 This is the latest news about the 3 podencos trapped in an enclosure for over 4 weeks in the path of the lava flow on Las Palmas.

Very strange to me...the dogs were left for 4 weeks, then lots of publicity and then they have disappeared! Podenca Freya arrived at GRA in February, pregnant after wandering around the campo, just in time to give birth in a safe and clean environment. See the video.

At her arrival she was very timid but after giving birth and raising 6 beautiful puppies we see another Freya. She’s playing, good with other dogs and not shy anymore.

She is now hoping for her forever home. See more photos of her on this weblink.

Also at GRA is Podenco Marlos. Thanks to an uncaring hunter he has a deformed knee. However, that doesn't need to be a problem - I had a galgo Polar with an injured knee and it didn't stop him enjoying life to the full! Read more about Marlos on this weblink.

If you can offer either of these beautiful podencos a forever home, please contact Sandy at GRA direct.

Good news now that these podencos are going to be rescued but why did they have to wait 29 days till the flow got so close?!!
Read the article on this weblink.