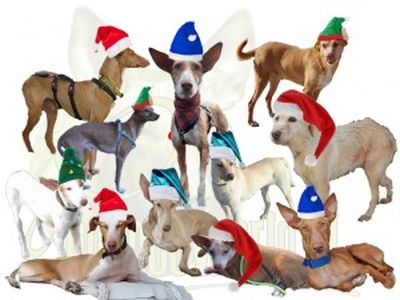 Podencoworld Holland was founded in 2009 and since then I have reported on much of their news, and indeed their founder wrote the foreword for my book From Pyramid to Perrera. They are working closely with a shelter in Tenerife to home rescued podencos back on mainland europe and this is a link to the story of the visit by 4 volunteers as well of news of more of their work. If you aren't able to get it in english, click on the Union Jack top right hand corner. 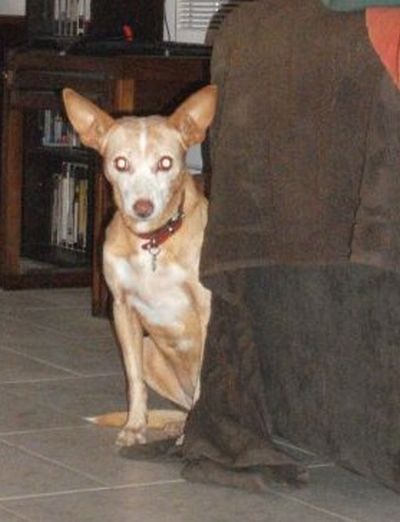 Bebe and myself wish all Podenco Post readers a peaceful and joyous Christmas and a healthy, happy and prosperous 2019. Thank you all for continuing to read the News and supporting the appeals to help need hounds.

My adorable little Bebe is 16 years old now, slowing down a little but still bossing the galgo pack around! Below are a few pix we're sharing with you, including one of the first ones I received when she was rescued with an injured hip from a road in Seville. Such a tiny skinny traumatised little podenca.

There's also one of her in her favourite spot in front of the fire with buddy Polar from Pepis Refuge and another with Bracken from Galgos del Sol. Also helping Polar, Carmela and Bracken clean up the barbeque! I recently learnt of the death on Sunday 5th August 2018 of Anne Finich, Founder of Greyhounds In Need, who tireless work on behalf of the greyhounds and Spanish galgos has lead to the current high profile of the abuse and maltreatment of the dogs and also the Podencos. Since she founded Greyhounds In Need hundreds of rescue associations and shelters for these hounds are now in existence, and the number of rescued hounds now living out their lives knowing love, a comfy bed and regular meals is countless. Here is a link to the GIN press release. Beryl Brennan on 28 January 2018 in In the media, Profiles, Regional news | Permalink | Comments (2) Continue reading "Renovating a house on Fuerteventura - no chance when the podencos are lost!" » Not about podencos but about any dog. I take my young galgo Polar to Obedience classes and a couple of weeks ago on the Club fb page was a video about a dog training club in Australia, where one of the proprietors is a paraplegic, which obviously involves some dog training different from non-disabled. Here is a link to their website, if anyone is interested in discussing the subject with Tom.

They also have several interesting videos, including this one on training a dog to obey in different situations, plus short articles with graphics

Wonderful assortment of martingale collars for galgos and podencos. Browse the freetofeet website.

Beryl Brennan on 23 February 2017 in In the media, Profiles, Regional news | Permalink | Comments (1)

Lost, abandoned - how to choose a family 'On our return journey from England so Spain in September 2015, with our 3 Spanish rescue dogs, we pulled in with our Motorhome to a service area near Valencia for a welcome coffee stop. On entering the lorry parking area we both noticed a small brown head peering over a concrete block and at once looked at each other and said 'did you see what I saw'.

Behold a very thin young Podenco female emerged with a 5cm thick lump of rope round and hanging from her neck. Just able to stand but wagging the tail in a small movement to say Hallo! She knew instantly we would not hurt her,we had found a friend for life. On seeing our family she staggered over to greet them, so dehydrated and malnourished she went for the water first before a bowl of food.

Continue reading "Lost, abandoned - how to choose a family" »