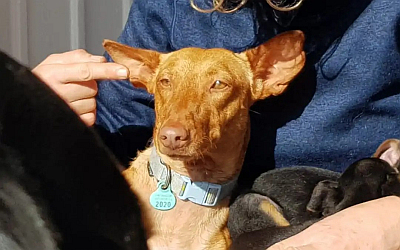 This is the story of a poor podenca, seriously injured and left for dead at the side of a Seville road in the cold and wet. Finally after 3 days someone took pity on her. Refugio Kimba to the rescue.

'All of us who have traveled the roads and know the number of animals that are run over every year, either because they have been abandoned, or because some people who are supposed to be responsible for them tend to have them loose and without control, we usually keep an eye out for we find some in that circumstance.

This is how a man who traveled the same route every day due to his work, published on social networks that he had been seeing a dog run over for three days in a row and that apparently he could not move. With a lot of effort, since whoever sounded the alarm only said that the animal was on the Conil de la Frontera road but did not specify a kilometer or give any more information, we found it lying on the roadside completely wet and with significant hypothermia (like He had been there for at least three days) a puppy that only had a thread of life left that by the look he gave us as we approached, he was already about to cut.'

Read the full story on this weblink.

Beryl Brennan on 09 July 2022 in In the media, Regional news, Rehabilitation | Permalink