Dealing with fear in rescued dogs 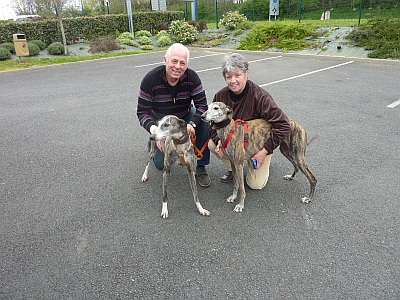 Many years ago on one of my many trips into Spain with French association L'Europe des Levriers we were asked to take a fearful galga who had been in foster in Southern France and was not improving. So Carmela came into my life and home. At 4 years old she had found herself dumped in a perrera, rescued by the association's vice president in Spain, passported and blood tested and into foster in France.

At the time we had a French lurcher, 2 other galgos and a small podenca. So plenty of company for Carmela to give her confidence. She was fearful of my husband - not surprising as most Spanish rescued hunting dogs are fearful of men - whatever do the hunters inflict on them?! She would exit the farmhouse into the enclosed courtyard following the other dogs but coming back inside was a different matter. All the doors had to be open and we humans had to hide out of sight. Eventually she would rush in like a tornado. Frequent shaking if my husband appeared, even though he doesn't look Spanish, only eating food if we were out of sight.

Luckily my beautiful brindle galga Sahara was the total opposite - had never known cruelty in her 18 months of age and loved the world and everyone. So Carmela had a good example to learn from, that not everything in life was bad.

With plenty of patience and quiet care, after about 2 1/2 years Carmela became as near a 'normal' dog as we could hope and as time went on was happy to return the love bestowed on her. She crossed the rainbow bridge 2 years ago after suffering 2 strokes, at 14 1/2 years of age.

Here's an interesting article on the subject of fear in dogs.