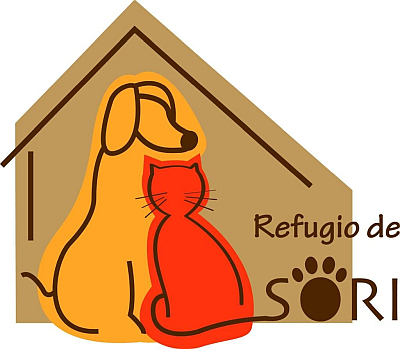 'News from our friends at Refugio de Sori in Hellin, Albacete: Azzura currently has an all clear for her cancer, and she has moved in with a local FOSTER FAMILY IN SPAIN! Do enjoy her new photos and videos to see how happy she is, and please read on for more background, more on her story & how to donate to help Azzura and her dog-friends.

Dear Friends and Family of the "In Kennels & In-Visible" dogs - our little "rolling" pack of Spaniards we have taken under our wing together, some heartening news for this beautiful soulful girl who many of you know, but maybe not all of you. Our "Invisibles" are generally dogs without a sponsoring rescue association who we help directly to get out of a large commercial rural kennels near Tobarra in Albacete province where they have landed up for a number of reasons. And of course new dogs keep on landing up there and in desperate need... the terrible reality for countless animals across Spain.

Often the kennels family have taken stray dogs in themselves, or they have been dumped there etc. But because there are no local volunteers to help visit or promote them, the dogs risk becoming totally invisible there. Wonderfully many people have been part of our team to get a huge backlog of "lost" dogs out of the kennels to happy homes over the last years.

But others of our "Invisibles" are under the care of dedicated Spanish friends who are running small rescue associations under great pressure and could do with a hand. Either with a dog in their care who has become overlooked for years, or a breed where there are so many dogs and fewer possible homes in Spain, as it is for the poor hunting podencos, abandoned in their tens of thousands each year. Azzura is one of these. 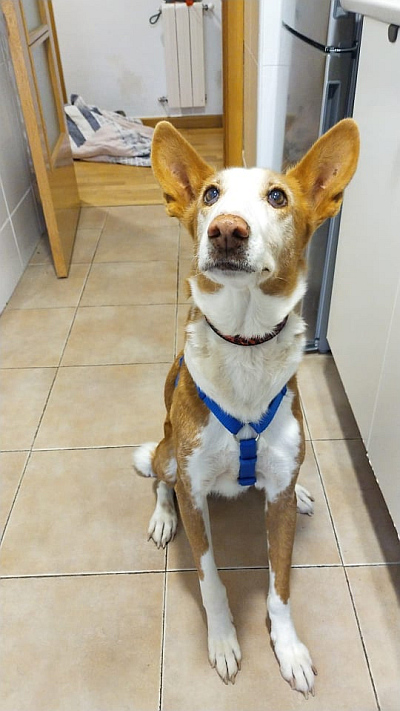 And so we have been promoting Azzura for a family and helping out a little bit with this special gentle girl who is with Refugio de Sori, which is situated just up the road from the kennels at Hellin.

Refugio de Sori friends found Azzura last summer on the streets with a huge mammary cancer. They took her in and operated and have looked after her so well since. Then sadly this January she developed a sudden new cancer. And everything looked so worrying for her after her second operation, because it was difficult to seek adoption when her health was so uncertain. She needed more tests and monitoring with a larger vet practice close by, and ideally to get out of the refuge situation which she was finding stressful with many other dogs about. SO Refugio de Sori's Noelia now has the best news: that Sori volunteer Gala (in the photo with Azzura) has organised for this sensitive poddie to go to her mother-in-law Rosa and live with her and her daughter Melisa and their two adopted cats! So Azzura is now in a HOME with a foster Mum and a little family in Albacete where she can be spoiled and loved as she so deserves. And meanwhile Azzura has had some follow up tests and for the moment there is no further cancer. We hope and pray it stays that way.

But her x-ray did show two gun pellets! We don't know whether she got caught in the cross-fire as a hunting podenca or she was intentionally aimed at. But happily the pellets did not reach any vital organs and our sweet warrior is now enjoying being pampered, taken for walks, given treats and snoozing. It's a chance for this maybe 7 year old hound (we don't know her age for sure) to have an easy life at last after no doubt suffering badly under the "ownership" of a hunter, and her health can be carefully watched.

We will update if Azzura is still looking for adoption, but for the moment she is LOVED and safe and it is the best. Stay so well dearest Azzura . And all thanks to everyone at Refugio de Sori, in particular Noelia, Rosa, Melisa and Gala.

For our part our little "Invisibles Godmum Group" is sending a donation towards Azzura's vet costs and if you would like to send some too that would be so appreciated. Sori is an amazing little organisation of dedicated animal friends who have courageously taken over the running of the Hellin town pound to make it a refuge and not allow any dogs to be put to sleep. They currently have 23 dogs and 21 cats to care for and they could really do with extra support. The costs and stress and work are significant for them. It is very tough for animals in this rural area.

Paypal address for donations is paypal.me/Refugiodesorri (the two r's is the correct spelling) 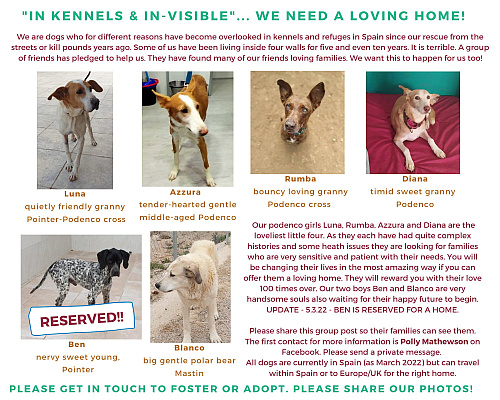