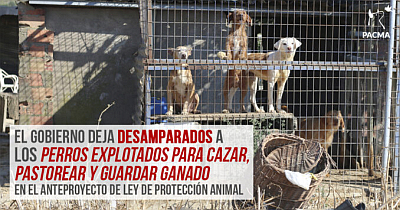 'As you may know, in recent months there has been a considerable stir around possible changes in the Penal Code that would affect the penalties for animal abuse.

The reforms that are projected in its draft are very far from meeting the expectations of animal activists; not even with those of current social feeling. The abusers will continue without stepping on jail.

Killing and mistreating animals will remain a game.

The maximum sentence for assault on an animal resulting in death is 24 months; just the minimum to avoid going to prison. The potential prison saturation could lead the judges to decide to change the sentence for a fine, whose bureaucratic process has also been streamlined. Many may become insolvent.

As you can see, we are facing an unprecedented nonsense. A unique opportunity to defend animals has been wasted.

Luckily, at PACMA we have clear priorities and maximum energy to continue fighting.

Are you with our cause?'