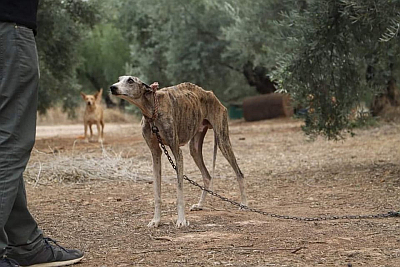 Yeah!! The Government approves the processing of the Animal Welfare Law that includes hunting and working dogs, which will be treated like any other dog. Moreover, this law, approved a week ago in the Council of Ministers, will not only protect pets but all vertebrates as a whole. Wow!! Among other things, we celebrate that: Dog owners will have to become breeders and register as such if they want to breed animals. Whoever has five specimens must be registered as a zoological nucleus. Working dogs will have to meet conditions from the point of view of occupational risk prevention; they will not carry out professional activities until they are 18 months of age. All dogs must be registered as such in the Registry of Companion Animals. Hunting dogs that are kept or have access to the exterior of the houses and may have uncontrolled contact with others must be sterilized. As for giving away or selling a hunting dog to people not registered in the Breeders' Registry, the dog must be spayed or with the commitment of its sterilization.

ONLY this is the real truth!

Paradoxical result for one side that in the exhibition of motives that intends to ground the amendment of the Criminal Code in animal abuse is referred to: “... Both the Ministry of Tax and some courts and courts have misled the slightest amount of penalties typified for these crimes. Therefore it is not surprising the outrage of Spanish society, which is claiming boldness in front of this kind of execrable behaviors and also a greater application of the real competition of crimes in cases in which the actions of maltrat or affect several animals... ” and by another when we dive into the analysis of the text we can observe practically a DEPENALIZATION of animal abuse, analyze yourselves:

1. - In the face of a case of animal abuse resulting in injuries: Prison sentence of three to eighteen months OR FINE OF SIX TO TWELVE MONTHS... (i.e. a rehab where 20, 30, 40 dogs with plain-sight injuries can exist: mamary tumors, cachexia that can lead to death, wounds derived from a hunt... ) YOU CAN CONQUER THE PROCESS WITH A SIMPLE ECONOMIC FINE.

2. - If the animal dies, whether it is 1 or 20 ANIMALS: Prison sentence of twelve to twenty-four months OR FINE OF TEN or EIGHT TO Twenty-four months: IT CAN EQUALLY CONCERNING THE PROCESS WITH A SIMPLE ECONOMIC FINE.

This proposed reform far from protecting animals leaves them in the absolute vaping.

DAMAC Juristas say outright NO to this proposal. NO TO THE DESPENALIZATION OF ANIMAL ABUSE, NO TO THE IMPUNITY OF ABUSERS.
WE ARE ALREADY WORKING ON A CONSTANT BATTERY OF ALLEGATIONS TO TRY TO PREVENT THIS LEGISLATIVE WITHDRAW.

Do they take us for idiots, don't let yourself be manipulated by the Spanish Government

1. The only thing that has been passed in the Council of Ministers is the draft Animal Welfare Act.

2. Now they have to open a period of public attendance for citizens and entities to make allegations to the draft law.

3. Then, with the amendments, they have to bring back the final draft to the Council of Ministers for its approval.

4. The next step would be to bring the law to Congress for its final approval. Only the Congress of Deputies has the power to pass the Law.

5. After more than 2 years of Government, due to the absence of this one, we are in the initial process of this Law, so it will hardly see the light.

6. Only the autonomous animal protection laws are applicable, some very obsolete.

THE ANIMALS CONTINUE TO LACK PROTECTION!

Beryl Brennan on 26 February 2022 in Campaign, In the media, Regional news | Permalink