« Finding the right home for a rescue dog | Main | Can kinesiology taping help your dog? »

Introducing blind podenco Bocelli - a new learning curve for us

Bocelli (known as Bo) is the second of our newly adopted podencos. Unusually for a white podenco, he is blind rather than deaf as some white dogs are. My OH was actually looking to adopt another galgo but he spotted Bo on the Ibizan Hound Rescue website and was immediately drawn to him. Bo was also on the website of Blind Dog Rescue UK and so I completed the pre-adoption form with them and kept my fingers crossed!

Bo had been in a wonderful foster home in the UK after apparently spending most of his 8 years on the end of a chain in a 'horrible place' in Lorca, Murcia. His fosterer believes he can see shadows/shapes and he adapted well to living in a home environment with other dogs.

Adopting a blind dog is a first for us so it's a completely new learning curve. His bed is by our back door - which is a patio door which has a vertical blind for dark nights. You will see from the photo below that I've 'parcelled' it up in a pillowcase and take so that Bo does not risk getting his face caught in it. Outside is a ramp which leads into a small enclosed garden. The ramp is ideal - the previous owner of the bungalow was in a wheelchair - insofar as Bo does not have to negotiate any steps. After a month with us, he now knows his way on his own out of the back door down the ramp and onto the back lawn to the toilet. His housemate Rosie wears a bell so he always knows where she is but so far she hasn't taken him under her wing, apart from wanting to share his bed or sometimes leaving one of her soft toys on it! Poor boy, his face shows the scars of bumping into things, he has 2 completely bare patches on his bottom and his tail is not its full length. He makes a 'humming' noise when he wants to go out to the toilet during the night, generally when my OH gets up to do the same - Bo seems to sense when he is there! He also usually follows Rosie when she goes out. He has his meal on a stand rather than the floor - better for digestion for a big dog - and knows from hearing where his meals are prepared.

My OH tried leading him out of the kitchen into the living area of the bungalow a couple of weeks ago, which didn't work as Bo was reluctant to go out of the kitchen door into the hall. But progress has been made this week now he is feeling much more settled and confident and will be led into the lounge and study which will be his spaces too. Hopefully by the end of next week he will follow my husband's voice into the study where there is a dog bed used by Rosie when I'm on the computer in there rather than at the dining table on my laptop.

Walking on his harness and lead outside is a work in progress, Bo is still very nervous. Rosie and I have tried walking in front so he can follow our scent; it's just a small close of bungalows, no danger from traffic so Bo is being encouraged by our voices too. Scent and hearing are highly developed in blind dogs so Bo naturally walks with his head to the ground. As Bo is a big dog, about 27kg, we've bought a ramp in the hope that we can teach him to walk up it into the car, rather than struggle lifting him. So that's another work in progress.

He is a lovely dog and, despite his handicap, we hope will have a long and happy life such as he would never have known had he not been rescued.

Sight loss in a dog is not an insurmountable handicap, there is a lot of good advice and information on the Internet. If you are concerned at any time about your dog's eyes, please consult a vet. I recently learned of a case where a dog was misdiagnosed and treated by a vet for conjunctivitis when in fact it was glaucoma, too late to save the dog's sight. 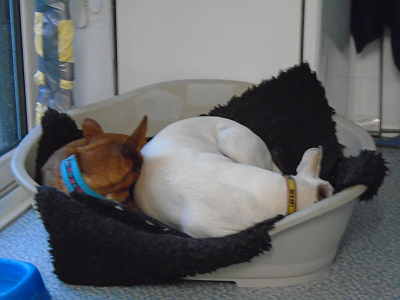