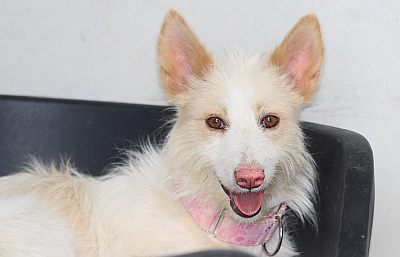 My first galga, adopted in 2007, became ill and the eventual diagnosis was Pemphigus Foliaceous. This story is the first time since then that I have come across the condition in a dog. This is the story of Elsa, with Galgos del Sol.

Elsa is looking for a new home. A few months back she was diagnosed with an auto-immune disease, pemphigus, which we have been treating here. It manifests with crusty nose lesions as shown in the photo below. Pemphigus is not contagious and of a genetic disposition. The vet where she was homed was unsure of a treatment plan. She’s been treated with steroids and has responded well. Elsa’s symptoms have cleared up and she’s back to normal for now. It’s possible and likely she will have flare ups and the treatment would always be the same — three weeks of steroids. In many cases there can be very few flare ups and the dog can live a normal life. However, when there is a need, case management is essential. Elsa loves to be with other dogs, she’s quite shy but does come around. If you are interested in taking on a case and a lovely dog like Elsa please contact us galgosdelsol@hotmail.com

Elsa has not had an easy life. This is her heartbreaking story.

Elsa found herself the victim of a rushed rescue that took away some of her babies whilst leaving others on the streets to fend for themselves; it’s now believed they did not survive. She witnessed it all so no longer trusted humans and had seen how the trap works. No matter how good the food smelled, she would not go near the trap having learned what happened to separate her from her babies. Luckily for Elsa three wonderful ladies were willing to show her that she was worth it. They had the patience, skill and a deep need to help her no matter what it took. Maria, who GDS works with regularly, drove over 1500km over a period of six months to get Elsa into a routine. She even made a special trap which took weeks to finish to see if Elsa could be tricked but she had already seen too much in the past.

Two other ladies, Rosa and Madelena, lived closer and kept Elsa fed so she didn’t die of starvation or thirst. They kept in touch with Maria about Elsa’s movements and they noticed that Elsa was warming up to a man walking his dog each day. They got him involved in the rescue and bit by bit his dog gained her confidence until finally the man managed to slip a lead over her. Maria was so happy but of course knew that Elsa was not going to be easy and needed a special place to stay where she would feel safe and have time to get used to her new life.

Dogs that have been on the streets for a long time and that are smart need to adjust slowly and carefully to their new way of life. They require positive methods which necessitate knowledge and experience. We are honoured that Maria had faith in GDS to take care of Elsa until she is ready for her forever home. She’s witnessed the worst and now the work begins to help her trust again and see that humans are worthy of her love. Elsa, you are so lucky Maria was looking out for you when no one else would. Maria is a true rescuer and our hero. 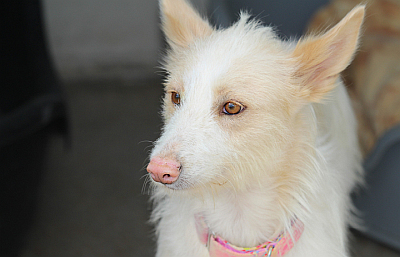 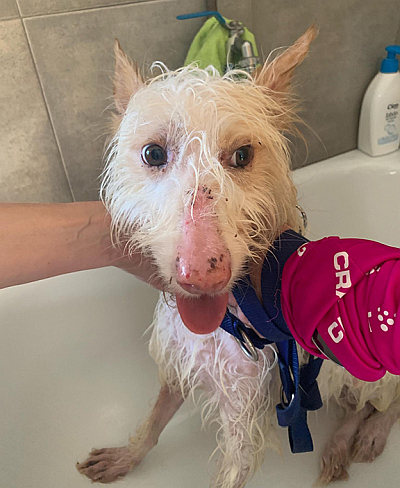