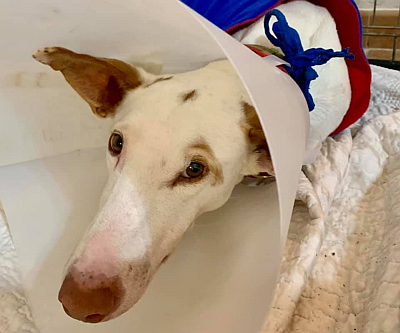 Bev had to take Travis to the vet on 23rd January as he pulled out his stomach stitches after his operation. He was stitched up and went home. Yesterday this happened!

'Oh Travis.. you scared me last night ! today he has eaten and been out for a few walks on the lead in the paddock.

Last night I had given his evening meds he was fine went to do something came back 5 minutes later to take him for a walk. To see blood everywhere on the walls the floor he was covered in it. He was trying to pull his insides out and screaming. Has I tried to strap it up to stem the bleeding he was trying to bite me he was in such a panic ..

The emergency vet I’m registered at is over an hour away I called a friend to ask for help. She rang her vet who is closer and they very kindly offered to open the clinic ..My friend dropped what she was doing and drove to the finca and took us to her vet. I had to hold onto Travis to stop him going for the wound..

The vet reassured me it was just muscle he had torn, the internal organs were ok .. was lucky that he had just done it; if left he could have caused a lot more damage to himself . She stitched him up internal and external stitches. Then waited for him to wake up from the sedation. Back home he refused to lie down; finally at 4 am exhaustion took over and he laid down and was more relaxed. The house looked like something from a horror movie, blood everywhere, even in my hair. So I spent a couple of hours cleaning up.

I really don’t know what happened with his stitches, either they had blown or he pulled them. It was one of those WTF moments, not one I don’t want to go through again.

My friend, I can not thank her enough for her help. She could hear the panic in my voice on the phone and just said I’m on my way. Gracias Chica'

Beryl Brennan on 25 January 2021 in In the media, Regional news | Permalink