Update - 90 Mogan Podencos on Gran Canaria - they are out! 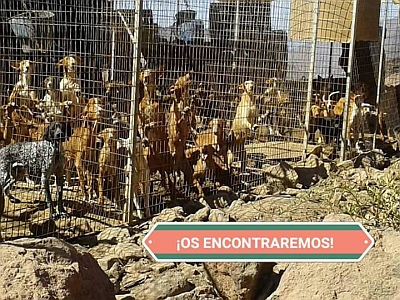 Apologies this news is a few months late...facebook has messed up my page and I no longer get updates from some of the podenco and galgo pages I follow.

'Across Spain there are several cases where the Civil Guardia confiscates when it appreciates obvious evidence of overcrowding, unsanitary, lack of identification, etc EXCEPT with the 90 Podencos. I can say that the Canary Podenco suffers from the greatest abuse allowed in SPAIN by all the administrations that have delegated, curiously, the protection of these and other animals.

5 4 2020 FINALLY!! Saturday, April 4, 2020, seven years later of the first complaint finally the ′90 podencos′ have been rescued. A total of 84 dogs were taken to the Bathtub hostel in an action involving the Civil Guard, Local Police and animal protector volunteers.

I took this photo back in 2013 when they were in Los Albarianes (Mogán) and I've been so happy to know that one of the survivors is that white and black podenco you see on your left. I feel like this because I always said only for a dog it would be worth so many years of noise. 115,000 signatures on change, radio, etc so they don't forget about them. I put them even with a brand on Google maps so justice doesn't get lost along the way...

I didn't participate in the rescue but I feel part of it. Thank you to all the people who have followed this case forever and who will continue to do so because now it starts how really hard, it is to look for exits for all of them. In these years I was able to raise some funds that will go to partly cover the expenses and I will tell you how and when they occur. I don't have any more details to tell for now.

The news was published on https://www.grancanariatv.com/2020/04/rescatados-los-90-podencos-de-mogan-que.html?m=1

From April the dogs were taken to Bathtub hostel and no official information has been provided about the case. In any case I have decided not to wait any longer to help not only those podencos but ALL the podencos that are adopted or hostel in Bathtub hostel. I don't feel able to support one and not another financially, always within the limits we have raised among all and that today's balance is 2605,93 €. The teaming group continues working in case you want to join for 1 € / month.

Well, the initial idea is to cover part of the expenses they may require after being adopted or taken in: foster, veterinary, food, transfers, etc. They will understand that there will be dogs that need more help than others and I hope it is not a reason for discussion because I leave the premise that are not adopted or hosted by this help. Dog card required where date and place of adoption appears.

The money will be transferred to the company that provides the service: clinic, nursery, store, etc and the bill to my name so that it is reliable who has paid the amount. Any questions pm me. Suggestions are accepted. Thank you for supporting the cause all these years.

Below is a list of the protectoras, shelters, etc. willing to host at least one podenco of the 84 that are currently in the Bañaderos Shelter. They can contact them directly to send them the donations or offer to be a shelter and Adoptions We obviously include the Insular Shelter itself as they are currently receiving them while waiting for the court to decide:

UPDATE (12-08-20): As we now know on April 4, all 84 podencos were seized and moved to the Island Bathroom Hostel. As far as I know the case is still in pre-trial investigation. An association and an individual have been filed as a particular accusation.

As for dogs, the hostel is the one who has custody of the animals and it is they who know firsthand the health status in addition to the protectors and volunteers who have already been collaborating with the hostel earlier.

Nowy on the web, these podencos are ready to adopt and will be helped financially if they require any treatment or operation not assumed by the Cabildo after leaving the compound: