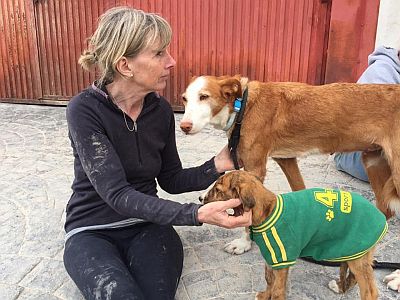 'One year ago Carley arrived at the finca with PJ .. Sandra Inglis and Dave Inglis had come over to give me some help and I don't think it was their intention to adopt another podenco but they fell in love with Carley the moment they met her.. Then camw the terrible news she was very ill many mammary tumours which were all malignant. she went through two very major and invasive surgeries then chemo but she came through and after nearly 10 months she boarded the transport to her new home.

Carley is such a special Podenca. She took galgo PJ who was not her pup under her care and whilst on the streets she kept him alive. He was so thin he couldn't maintain his body temperature and she would wrap herself around him to keep him warm. Carly showed more love and compassion for this wee waif than most humans are capable of. Their obvious love for one another was a joy to see and she was generous enough to allow him to spend time with me. I had no intention of adopting another dog, it wasn't the right time in my life but he wrapped his paws around my heart so I had decided he would stay. Sadly it was not meant to be and he had a condition so severe it was not treatable and he gained his wings a few weeks later.

Carley felt the loss of him just as much has I did and she never found that level of companionship with any of the other dogs at the finca.

I am often asked 'how can you let them go especially when you have invested so much of yourself in their care and of course you get very close to them'. I always knew that for Carley it was not right for her to remain at the finca, she always remained in the shadows of so many dogs. What she needed was a family of her own and she is different girl now, out going and enjoying her life to the full. We had to pull her off the first transport because she had not been well through the night. I called Sandra that morning and promised her I wasn't keeping Carley, she was not to worry and would get her the next available one.

I understand that my role is to remove these dogs from dangerous situation,s give them safe haven and a chance to recover. We are just temporary guardians until such time the right family finds them and with Sandra and Dave they were the perfect family. Only then are the dogs truly rescued

From huddled up in an old finca trying to find some cover from the bad weather to now running free in the Scottish highlands Carly could not be more happier.

Thank you to everyone that supported her and also PJ we could not have done it without you.' 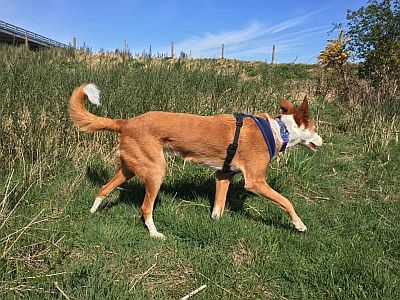