« News from Hope for Podencos | Main | A Podenco - every home should have one. » 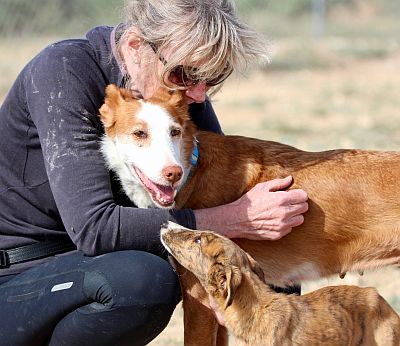 'Back in April 2019 when a message came through asking for help with Carley & PJ the photo they sent struck a chord with me to see a Podenca taking a young galgo pup under her wing. Abandoned in the countryside entwined together I am sure it was Carley's body warmth that had kept PJ alive, He was so thin he could not maintain his body temperature. When he arrived we needed to put two jackets on him to keep him warm.

What seemed a straight forward rescue soon changed, I never expected to have two seriously sick dogs. PJ had been born with a condition where his bile duct had not developed and the damage to his liver was beyond repair. Surgery was discussed with specialists but they didn't think he would survive the Anesthesia, his liver was so compromised . So I took the decision to let him enjoy the time he had and when the day came he would close his eyes for the last time in my arm,s not on an operating table.

Then the fight for Carley. She had multiple malignant mammary tumours and went through two very invasive surgeries to remove both mammary chains But she is a strong girl and came through the surgeries well and has responded well to her chemo. Six months later her utra-sounds and xrays are clear.

We will never know the circumstances that brought these two souls together, both kindred spirits and very bonded to one another. Carley felt the loss of PJ just as much has me and she has never found that connection with any of the other dogs here at the finca. A very kind and gracious Podenca who asks for nothing, I can not believe that such a gentle kind dog was thrown away . But my work is now done and she is ready to leave, and it,s time for me to hand her into the arms of her new family who I know will give Carley the life she is owed. One where she will sleep in front of a warm fire and so much love, she will want for nothing.

Sandra Inglis and Dave Inglis were here at the finca when she arrived and they fell in love with her at first sight. They have waited all this time until Carley was ready to travel and next week she will set off to her new life. Sandra & Dave has been so supportive to me this last year and I can not thank them enough for everything they have done. They have been here to comfort me in the sad times and we have shared much laughter. Now they give the greatest gift ever and Carley will have her forever sofa.

Beryl Brennan on 18 January 2020 in In the media, Regional news | Permalink