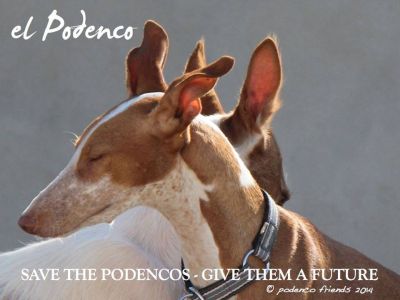 Yet daily we receive more and reports of Podencos abused, abandoned handed in to Perreras. They are viewed as disposable not animals with feelings but working dogs and when no longer useful, discarded with as much thought as we would throw a soda can into a bin. Many are Podenco crosses but they still should be afforded the same respect as the pure bred for the still have the blood of a podenco coursing in their veins.

Yet we see them for sale on second hand web sites for a little as 20 euros or to be used as a commodity to exchange for car parts. The Podencos need us we have to be their voice for the start of of the hunting season draws ever closer.

Soon we will hear more reports of Podencos in need of help has those who do not make the grade will be cast aside. So the cycle continues and where can they go? shelters, rescues are already busting at the seams.

Beryl Brennan on 08 September 2019 in Adopt, Campaign, In the media, Regional news | Permalink

So beautiful they are

We adopted a Podenco meneto from Spanish Stray Dogs. He arrived at 06:30 Sunday 27-01-2019 and after settling in has become a delightful companion. He absolutely loves running about the fields, with a penchant for following any track in the grass or stubble. The cost of bringing him from Spain to England has been worth it just for the laughs.
He sits on his towel in the workshop, when I am working, getting up to steal pieces of wood from my scrap pile. He not only chews wood, but also abrasive at times (this he is not allowed to keep).
He eats almost anything including carrot, runner beans, apple, banana and mango.
This dog is the most valuable in the world