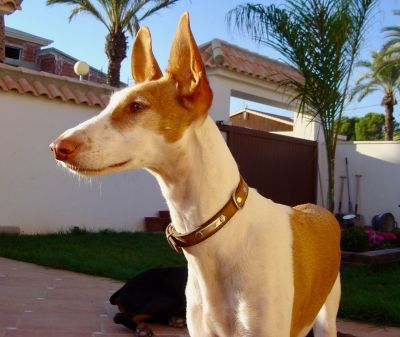 I first met podencos when I travelled to Spain in 2007 with a French rescue association L'Europe des Levriers, and that's when I got involved in publicising what fabulous hounds they are and the terrible maltreatment they suffer at the hands of the Spanish hunters, both on mainland Spain and the Canary and Balearic Islands. Here Bev Farmer writes about the podenca which changed her life.

'This photo is of Tilly back in 2003 when we first adopted her from a local rescue here in Spain, what was a podenco? I had no clue but I leaned very quickly and to say she tested me is an understatement. I considered myself an experienced dog owner, having dogs my whole life and Dobermans for over 20 years but everything I knew about dogs I threw in the bin and started from scratch with her.

Back then there was no social media, nothing really on the Internet about them. She was found in a dumpster under the rubbish with a broken leg. At the time I thought it was just a random act of cruelty and it wasn´t until a few years later that I discovered the plight of the Podencos. It's only in the last decade or so they are now been re-homed to families, before then they really were the "Los Grandes Olvidados" the great forgotten. I can not imagine how many 100´s of thousands have never been saved.

Tilly has been by my side (apart from her occasional escapes and walk abouts) for 16 years, she celebrated her 17th birthday back in April and she could be even older for she was an adult dog when we took her. Now she is almost all white, just her ears still are a light brown. She didn't age gracefully, her mind is still super sharp and she barks at me when she wants something, still the DIva. No longer able to chase the rabbits, she is a more sedate pace and I have to pick her up to go on the sofa or the bed.

So if you ever see a senior podenco for adoption don't discount them, they could bring many years of happiness into your life and of course theirs too.'

This is my little Podenca Andaluz now, aged about 16.

Beryl Brennan on 03 August 2019 in Adopt, Campaign, In the media, Regional news | Permalink

Thanks for sharing. That’s a beautiful baby