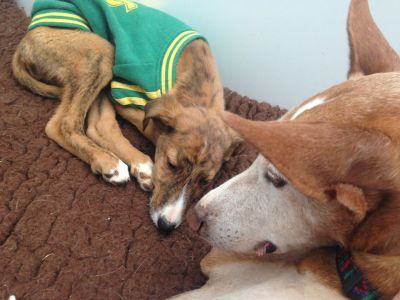 'A few days ago I collected PJ´S ashes and he is now back home and his casket is next to Midas. PJ was the last pup to come to the finca that received the kiss of Midas and in the first photo was the day Midas was getting his chemo and we had to bring Carley and PJ to the clinic . Whilst Carley was having her xrays etc we brought PJ in with us and what a precious couple of hours I was sat with them both and we all fell asleep curled up together.

That Friday I was thinking we are going to kick this cancer shit for Midas and he will recover and we will discover why PJ has problems with his liver and will get him better .. But that didnt happen and 3 days later I had to let my beautiful MIdas gain his wings. Then the fight was on for PJ he was a gift from the gods so much wisdom for one so young who made it quite clear he was my boy.

The first night he slept in my bed he squeezed in between Tilly and me .The first and the only dog that was allowed to do that Tilly who has very little tolerance for the antics of the pups snuggled up to him like he was one of her own. The last night at home when he became ill I settled him down with Carley for the night and they slept together . She was his saviour without her he would have died a horrible and painful death. I knew PJ was very ill so if this was to be his last night then he should be with Carley. To lose both Midas and PJ the sense of loss is physical and painful.

I loved them both just as much as one another although Midas had been in my Life for 10 years PJ only a few weeks but had made that meaningful and deep connection with him ...

I would have done anything to keep them, I miss them both so much and my other dogs try to comfort me . The day Midas died I came back home and fell asleep sat up on the sofa exhausted from crying so much . To wake up and find all the dogs surrounding me almost like a cocoon each had found a space so they were able to be next me.

I so hope that Midas my golden boy and PJ my wee man are together that Midas is looking out for him ... Two precious souls and very pure spirits there is a hole in my heart that will take a long time to heal ...

Midas & PJ time to go chasing bunnies and running through fields full of flowers. Until we meet again, you will always and forever be in my heart' 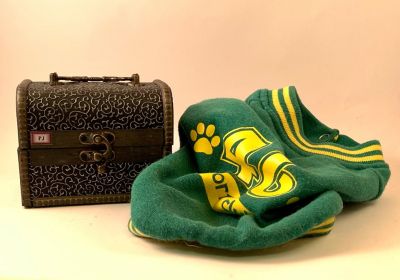 Beryl Brennan on 13 August 2019 in In the media, Regional news | Permalink