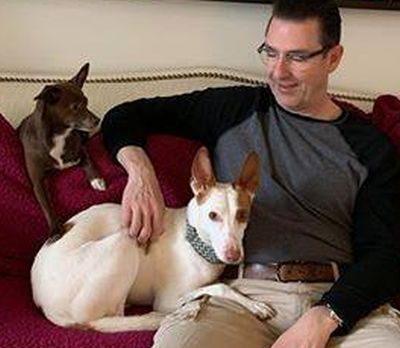 'Had the most lovely message recently. Vicente was a Podenco living a life in fear at a petrol station, terrified of coming any where near people, dodging traffic, he was lucky he didnt get injured. Finally he was caught and on first arriving with us was very shut down but he came to be good friends with me.

He was one of the six podencos that went on the miracle flight arranged by SHUG just after Warren died. I had 48 hours to prepare the six for the flight and also was arranging Warren´s Funeral and they left a few hours after the funeral service. Everything was so rushed I never got a chance to say a proper goodbye to them and that did upset me. Michael Owens and Sophie Carley (of SHUG) HAVE kept me updated with all the Podencos so I knew they were safe and doing well.

Here is Vicente (aka Vinnie), his mum Claudia wrote to say "Vinnie and his big sister, Cholula, are inseparable. Stephen her husband makes Vicente scrambled eggs every morning, sometimes with ham. Vinnie adores him. We are eternally grateful. He is a sweetie pie."

The abandoned Podencos of Spain .. they just need a chance and look what happens when they get one .. the reason why we rescue, the reason we continue to be their voice.'

Beryl Brennan on 26 May 2019 in Adopt, Campaign, Regional news | Permalink