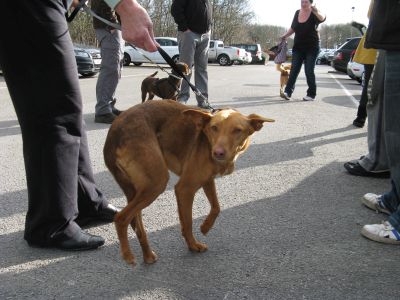 A heartwarming rehoming story from Vivien.

'I heard about the plight of the Podenco’s on Podenco Post in 2012. On it was a article about a Podenco called Ruso. He had been rescued from a hunter where he had been kept in a cage since he was a puppy. He was badly abused, starving and ill when he was found. He had been rejected as a hunting dog as he was no good at hunting so he was left to die.

When I saw Ruso on Podenco post I sent an email to a lady called Ainhoa who helps a wonderful lady in Seville called Inmaculada agomez Gonzalez who rescues Podencos and Galgos from a gipsy settlement.
Because she did not speak any English I was only contacted by Ainhoa who arranged Ruso’s transport to the UK with SOS podencos.

Sadly since having been brought back to health Ruso was still in kennels with no one showing any interest in him. We decided to foster him.

He arrived in the UK from his long journey from Spain, we first saw him being taken out of the van and he looked so frightened and cowered when placed on the ground.

At first he was nervous, withdrawn and timid but that started to change when he realized we were not a threat to him, his true nature emerged, he is gentle, affectionate, playful and intelligent, a little wilful and stubborn but totally adorable. A bonus was that he was ok with our cats.

We decided we had to give this darling boy his forever home. We have now had Ruso for 7 years and he is a joy to have around.

Here are 2 photos, the first when Ruso arrived from Spain and the second taken a few months later.

Thank you for sharing Ruso's story with us.