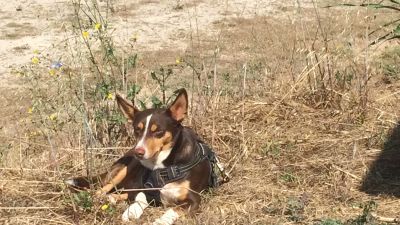 It's always great to publish a happy ending story for a lucky podenco...so many appeals for help and reports of cruelty cases...so enjoy reading the story of Foxy.

'My name is Linda and I travel around Spain and Portugal in my small motorhome. In 2017 in the summer a small (now I found out) Podenco Orito was clearly abandoned and was trying to survive on his own. He must have been on his own for a while as he was very skinny, scabs on his ears and nose and he was covered in over 40 ticks.

I don’t know why, but for some reason he picked me, he would come to me even though I did not even feed him. After about two days we became friends and he let me touch him and, with the help of a friend, we removed all the ticks. He was afraid to come inside my motorhome, but the moment I bought him a doggie bed, he was inside and claiming his space!

I decided to adopt him, so I took him to the vet where they first did a blood test to make sure he wasn’t ill (as he looked quite awful). Luckily he was healthy so he just needed shots, a chip, passport and some treatment for ear infections.

It’s now been a year and a half and Foxy is doing incredibly well. He’s an absolute clown, the sweetest dog I’ve ever met and we have a great time together. Since adopting Foxy I have been learning about the Podenco, and reading the stories on Podenco Post has made me cry like a baby. So awful, how can people do this to these wonderful, gentle, intelligent creatures...

Anyway, I thought I’d tell you about our little success story, and I’m spreading the word about Podencos everywhere we go. People adore Foxy at first sight, he makes friends wherever we go. Such a wonderful companion.'

Thank you for sharing the story of Foxy; if anyone else would like to send me a happy ending story I will love to post them. Email them to me with .jpg pix at banddbrennan@yahoo.co.uk. 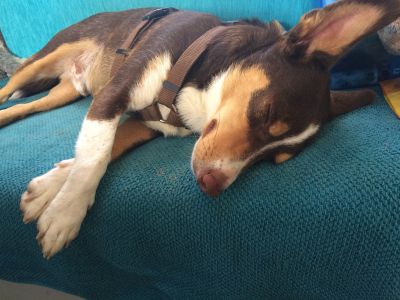 What a lovely story, thank you for sharing. He is beautiful, his markings are stunning and he certainly doesn't look awful now. Linda has clearly done a wonderful job with looking after him. He's a lucky boy and clearly enjoying his well deserved new life. I like reading the good news stories, brings a bit of hope and a ray of sunshine in.